The world’s first project on reinforcement of the foundation slab of a multi-storey building with composite polymer rebars was implemented in Salarevo Park district, Moscow, in December 2017. The project specified the GFRP rebars manufactured by Galen. The results of investigation of the foundation slab carried out by NIU MGSU and MSU named after M.V. Lomonosov have shown that the position of composite polymer rebars in structure’s body determined by the ground penetrating radar method coincided with the designed position of rebars in the slab.

To solve the problem, the researchers of NIU MGSU and MSU named after M.V. Lomonosov considered another method of the detection of composite polymer reinforcement in a foundation slab – the ground penetrating radar method.

The ground penetrating radar allowed the researchers to study the structure of the concrete slab through all its thickness and all over its area. With the help of the radar the position of two GFRP meshes and places of strengthened reinforcement, rebars overlapping was determined. Results of the investigation have shown that the foundation slab was reinforced in accordance with the practice: the actual location of composite polymer reinforcement in the concrete structure conforms to the design. 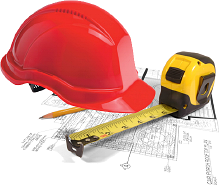